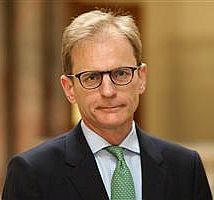 The Tampere Finnish-British Society was honored to host an informal question-and-answer audience with the new British Ambassador to Finland, the Honourable Tom Dodd, on Tuesday, 06 March, between 17:00-18:00 at Tampereen lyseon lukio, F. E. Sillanpäänkatu 7.Mr. Dodd had assumed his position as Her Majesty’s Ambassador to the Republic of Finland in January, succeeding Ambassador Sarah Price. This was his first visit to Tampere.

Ambassador Dodd began with an introduction to current ‘Brexit’ negotiations, timetables, and likely outcomes, and then responded to numerous audience questions on a wide range of issues. Light refreshments were served.